Three nice tunes up now including some good old lunacy from Flavor Flav, Barry White's band and a relative of Eddie Murphy (search for yourself, it's Friday and I can't be bothered to check)...

Barry White & The Love Unlimited Orchestra - Can't Seem To Find Him (1974 from the Together Brothers LP)
Posted by Ray Vaughn at 08:31 No comments:

The second radio show went out live last night on NE1FM and went pretty well (there was an interesting 3 min gap at the start of the show when the syndicated news feed failed) starting with some Public Enemy and going on from there.... As always though, judge for yourself and download it here.

We'll be back on air next Thursday, the 6th of August between 5 and 6 PM, providing a somewhat different drivetime radio experience!
Posted by Ray Vaughn at 00:55 No comments: 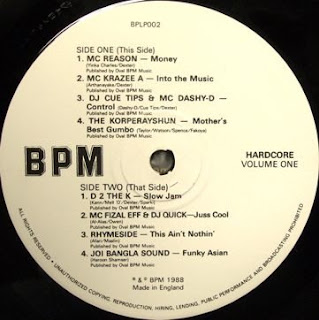 Back after a brief hiatus with a handful of tunes for your listening pleasure, been a touch busy of late so without further ado, here's the tunes with only a hint of waffle....

MC Krazee A - Into the Music

Both Korperayshun and MC Dashy D were to turn up again some years later on the superlative Kold Sweat label (Dashy D having renamed himself The Drunken Master) but all the above tunes were featured on the 1988 Hardcore One compilation LP released on BPM records. The album showcased the rising stars of UK hip hop at the time and is WELL worth seeking out... Enjoy!
Posted by Ray Vaughn at 09:07 No comments:

So, the first ever Bottomless Crates show went out live yesterday and went pretty well. We didn't burn the studio down and there was no loss of life (a success in my book).

We'll be better prepared next time (a lot of the tunes didn't load up in time and we deviated from our planned playlist a fair bit as a result) but you don't have to take our word for it, have a listen yourself....

We return to the airwaves in 2 weeks time, again between 6 and 7 on Thursday July 30th. The blog will still be updated in the meantime of course and if you want to show your support while waiting why not pay the official facebook group a visit? Anyone can join and say hello....
Posted by Ray Vaughn at 05:16 No comments:

We are LIVE on NE1FM from 6 till 7 pm this evening.

And some bonus breaks too.... 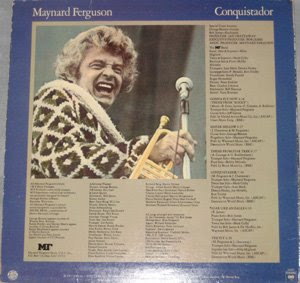 Couple of absolute gems here for you,

Minnie Riperton - "Inside My Love". Taken from the 1974 Album Perfect Angel. If you do not like this track, visit your doctor, something is very wrong with you. You will have heard covers of this before, this is the original and best by far.

Maynard Ferguson - "Mister Mellow" from the 1977 Conquistador album, features a quality bassline as previously used by Showbiz & A.G and is uber chilled throughout... nice. Quite surprising as Maynard himself looks like Jon Pertwee on PCP on the back cover... As a bonus-bonus, here's Maynard's covers of the "Rocky" theme and "Star Trek" theme, both from the same album.

Back to the Hip Hop

As with the last post, minimum of waffle, plenty of wholesome vinyl hip hop goodness, enjoy...

Sticking with the Bristol theme for a little while, here's a few tracks with Bristolian connections... Not a lot of waffle, just the facts...

Two Bacharach and David classics given the 1988 Bristol rinse now....

Kicking off Friday with Smith & Mighty's "Walk on By" and creeping across the lounge to The Wild Bunch's "The Look Of Love". As usual, all tunes are GM free although they were produced in an environment containing nuts.
Posted by Ray Vaughn at 05:35 No comments:

Just a quick shout to announce that The Bottomless Crates will be live on NE1 FM (102.5) next Thursday between 6 and 7 PM, providing radio listeners in the Newcastle Upon Tyne area that are blessed with bonafide taste an alternative late drivetime/early evening show.

Expect a serious dose of who knows what coupled with the usual standard of tunage.

More tunes on their way, hold tight!
Posted by Ray Vaughn at 10:52 No comments: 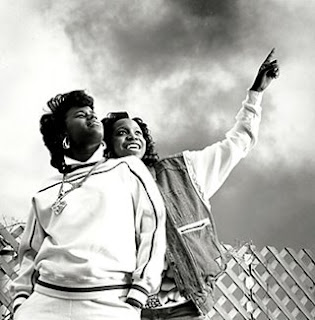 Good afternoon to y'all, back again with a few dusty treats after a sparse weekend and today, it's about the female UK rappers and a couple of belters for those who liked a dance.

All of today's tunes are brought to you by the year 1989.

Kicking us off with the laydees, we have the She Rockers with "On Stage", MC Martay & DJ DBM's "Beyond Control" plus "Female Force" and then a bit of the Cookie Crew's "Black Is The Word" (produced by Stetsasonic's Daddy-O and DBC). Then, we'll have a slice of DJ Mink's "Hey! Hey! Can U Relate" and for dessert, Shut Up And Dance with "5,6,7,8" which I'm delighted to reveal, samples George Kranz, not Steps.
Posted by Ray Vaughn at 08:35 No comments: 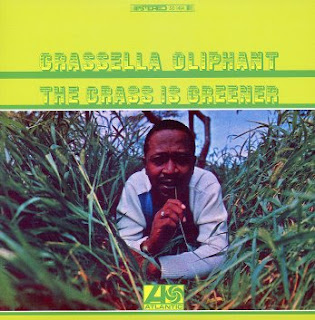 Bringing the Friday funk to a close now with one of many, many covers of Lee Dorsey's "Get Out My Life Woman". An undisputed classic covered by well over 20 artists and sampled by hundreds more since it's original release date of 1966 on Lee's debut album "The New Lee Dorsey".

This version is from Grassella Oliphant's 1967 debut album "The Grass Is Greener" and keeps it instrumental, letting the horns wail over the totally expected sweet, sweet drums and bassline.

Enjoy your weekend, more tunes are on the horizon and it's not that far away.....

PS, talking of multiple covers of this track... this is what I mean!
Posted by Ray Vaughn at 08:30 No comments:

More breaks for your general perusal and horizon-broadening now.

In 1970, Junior Mance released his 3rd album "With A Lotta Help From My Friends". The final track on here was "Don't Cha Hear Me Callin' To Ya", an absolute gem of an instrumental with a killer piano hook (as you'd kinda expect).

Secondly, another final album track, this time from Earth, Wind and Fire's self titled 1971 debut album, "Bad Tune". You may recognise this from a couple of places, either as the break from Brand Nubian's "Dance To My Ministry" or more likely, from the GTA 4 soundtrack (if I remember rightly).

Anyhoo, killer tunes and lovely breaks....
Posted by Ray Vaughn at 05:58 No comments:

A couple of 60's/70's stormers now, both full o horns, one from a particularly unlikely source...

Both tracks jam-packed with win, enjoy the vid as a bonus! 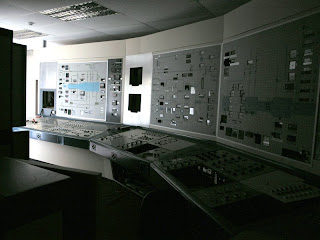 New to the Bottomless Crates from today (added from our secret laboratory, hidden beneath the Earth's crust) is the chat box which you find mid-way down the page.

Feel free to speak your mind here, you don't need to be logged in to an account and can post anonymously if you like (we retain the right to delete anything twatful and block spammers).

Butt in the meantime

So, as mentioned literally minutes ago, we are exploring other avenues while gazup is gazdown and reckon that mediafire may be one way forward, there is much less jumping through hoops for a start.

As it's a glorious summer's day here, how about a track that is a cover of an all time classic and a killer break to boot?

Peggy Lee first released her cover of "Sittin' On The Dock Of The Bay" as a track on her 1969 album "A Natural Woman" and it's featured on quite a few breaks compilations since then. If you haven't heard the track before, chances are you will know at least one other tune that samples it.... enjoy.

Gazup.com is still down, the following message is currently on the site;

On Tuesday the 30th of June Gazup.com was hacked by a group of hackers residing in the middle-east for no apparent reason but to spread political propaganda about western governments; completely unrelated to our service. They decided it would be fitting to delete our entire site as well.

Since then we have taken our service off line whilst we carefully reconstruct our system to patch any vulnerabilities and ensure the site was working how it was. We deeply apologize for this disruption and we're doing the best we can. Unfortunately there will be roughly 4-5 days worth of uploads and member data lost. We will try to make as much of this up as possible by steaming ahead with new features ensuring we remain the best mirroring website online.

The site should be back online Thursday evening / early Friday morning GMT.

Thank you for your patience.

So, we can expect restoration of service imminently but we are also exploring other mirroring/upload sites in the meantime. In fairness to Gazup, they were attacked without any real reason and we can't really have a go at them, their service is, after all, free of charge. However, we don't want to deprive you of the ever-growing backlog of funky gems that is growing and growing so expect news sooner rather than later on how we are moving forwards.

Which brings us to the next update.....

The Bottomless Crates are about to be dropped onto both FM radio in our local area and web streamed for those of you living further afield (Google Analytics indicates that we have many repeat visitors from the USA, Japan and throughout Europe)!!

Once we have dates confirmed you will be the first to know.... There are some other substantial improvements in the pipeline also, stay tuned for more news.

Incidentally, you may have been pointed here via Facebook in the last couple of days, if so, thanks for dropping by and checking us out. Things may seem quite basic at the moment but hold tight, as mentioned above, big things are coming soon.

Thanks everyone.
Posted by Ray Vaughn at 10:25 No comments: